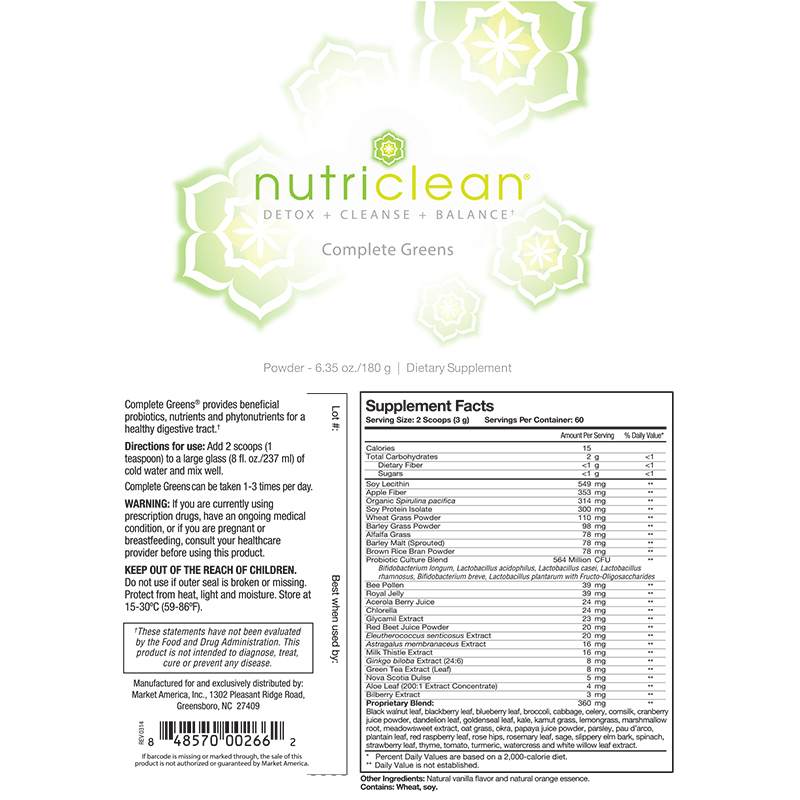 We all know how important it is for our health to consume the proper amount of fruits and vegetables each day, yet a world full of fast food and processed meals have led people to choose less healthy alternatives. This leads to deficiencies of the nutrients that are needed to lead a healthy lifestyle. Poor diets of unhealthy, processed foods, sweets and fats help set the stage for unhealthly living.

A vegetable-rich diet is a smart way to start looking, feeling and living better. If you can’t seem to accomplish that goal, Complete Greens offers green vegetable powders and natural grass fibers that are low in sodium, fat and calories and contain no cholesterol. Complete Greens helps to maintain a healthy digestive tract, with natural enzymes and provides nutrients to the body’s organs. Naturally-produced grasses can enhance diets which may lack the correct amount of fruits and vegetables needed as a part of a daily regimen.

Market America has made obtaining a healthier diet easier through the use of Complete Greens, which is a unique blend of over 50 natural ingredients that help you ingest nutrients that will help you live your demanding lifestyle. The ingredients in Complete Greens have been carefully selected for their efficiency and refined for optimal results. Complete Greens makes it possible for everyone to get the advantage of vegetables in their diets in a convenient manner.

Soy Lecithin, or phosphatidylcholine, is a phospholipid that supplies an exceptional source of choline that is a major component of cell membranes. It is important because it supports essential nutrients in entering and leaving cells. It is a mixture of neutral and polar lipids that are mainly produced from vegetable sources. Soybean, sunflower and rapeseed are the major plant sources, with soybean being the most common source. Soy lecithin is absorbed into the mucosal cells of the small intestine following the digestion by the pancreatic enzyme phospholipase.

Barley Grass contains many nutrients that the body needs to stay healthy. It is a rich source of chlorophyll, which is believed to have some health-promoting functions. A common use of barley grass is supporting digestive health.

Barley also contains a glucan and the alkaloid hordenine. When digested, the proteins, lipids and carbohydrates in the barley grass are absorbed and metabolized by normal physiological processes.

Barley malt is made from sprouted barley and is a thick, dark, slow-digesting sweetener. Malting is a process that is applied to barley, as well as other cereal grains, where the grains are made to germinate and then are quickly dried before the plant develops. Barley is the most common malt because of its high enzymes, which convert its starch supply into simple sugars. Barley malt promotes normal proper bacterial colonization of the colon and supports normal digestion. It also promotes a soothing effect on the digestive tract.

Spirulina is a genus of the phylum Cyanobacteria. It is classified as a blue-green algae or blue-green bacteria. Spirulina also contains chlorophyll, carotenoids and gamma-linolenic acid (GLA). The spirulina plants are aquatic and grow naturally in lakes that contain salt, mainly in Central and South America and in Africa. Those used in supplements are typically grown and harvested in outdoor tanks in California, Hawaii and Asia.

HSP naturally contains fatty acids. Spirulina contains low levels of fat, therefore the powder made from this alga is often mixed with juice as a supplement to low-calorie diets.

Wheat grass is the young grass of the wheat species. It is a rich source of chlorophyll, which is believed to have health-promoting activities. Wheat grass contains vitamins, minerals and amino acids that are essential for health. It can also support digestion.

Alfalfa is a perennial herb that grows throughout the world. The leaves of the plant are rich in nutrients and contribute to overall health.

Bran is the hard outer layer of cereal grains that consists of combined aleurone and pericarp. Bran is an essential part of whole grains and is usually produced as a by-product during the milling process in the production of refined grains. Bran is milled from rice and all cereal grains, including maize, oats, millet and wheat.

Bee Pollen (39 mg) Bee pollen consists of plant pollens gathered by worker bees combined with plant nectar and bee saliva. Pollen includes the male germ seeds of plants, flowers or blossoms on trees. Bee pollen is made up of about 25-30 percent proteins, 30-55 percent carbohydrates, one to 20 percent lipids, enzymes and trace amounts of other organic substances.

The acerola berry is the fruit of the small tree or bush known as Malphighia glabra. It is native to the Antilles and northern South America. The acerola berry is also known as the Barbados cherry, Antilles cherry, West Indies cherry or the Puerto Rican cherry. It was first analyzed by researchers in 1945 at the University of Puerto Rico’s School of Medicine.

What are phytonutrients and where are they found? The term phyto originated from a Greek word meaning plant. Phytonutrients are certain organic components of plants that are thought to promote human health. Fruits, vegetables, grains, legumes, nuts and teas are rich sources of phytonutrients.

What are enzymes needed for? Our bodies use enzymes for processes such as digestion. Enzymes are the catalysts for all metabolic activities in the body, and without them, life would not be possible. Our bodies contain thousands of different types of enzymes, but most foods we eat are processed and cooked, which causes them to lose enzymes. We can obtain natural enzymes from fresh, raw foods like fruits and vegetables or from supplements like those included in Complete Greens.

What exactly are probiotics? Probiotics are a type of bacteria. They should not be confused, however, with the unhealthy bacteria that can build up in our colons due to an unhealthy diet or taking antibiotics. Probiotics, like the ones found in Complete Greens, actually offset the actions of surplus harmful bacteria, thus promoting optimal overall health. The use of probiotics has been found to be helpful for the immune system and maintaining an optimally functioning digestive system. For centuries, cultures all over the world (Georgia, Azerbaijan, Ecuador, Himalayas) have used a variety of healthy microflora (probiotics) to sustain a healthy body. Probiotics need to be given in high amounts with over one billion per serving to be effective. They should also be consumed regularly.

Don't be put off by the colour. When we first drank it, the taste was 'so-so' but as we drank it every day, we realised that it actually tasted good. That was a few years back. Now, it still tastes so yummy. My kids (10 years old and 14 years old) love it! Thank you Market America! Now, I can be assured that my kids are getting enough 'greens' into their bodies. :)

Thank you for taking the time to share your thoughts on the Complete Greens®! We are happy to hear you are pleased with the product.
When giving a child an adult supplement we always recommend clearing it through a treating physician.

I love that this product is clean and so green. I can tell the difference in how I feel if I don’t eat enough greens daily. When I have a “slacker” diet day I can take some greens by taking the recommended 3 tablets and still feel like I ate well that day! I trust this company and their great quality control so I know there are no extra unwanted ingredients in this too!

Thank you for taking the time to leave your thoughts on the Complete Greens! We are happy to hear you are pleased with the product.

These complete greens are great to keep my body balanced !!!

Thank you for taking the time to leave your thoughts on the Complete Greens. We are happy to hear you are pleased with the product.

I put the complete greens powder in my smoothies, my trim tea and my husband puts in his brownies and other baked goods !! I can feel the Goodness !!!! no one eats enough greens so we add this everyday in several different ways !!!