My daughter likes this very much. Before it runs out, she would remind me to get more. I'm glad that it tastes great and it's building her immunity. 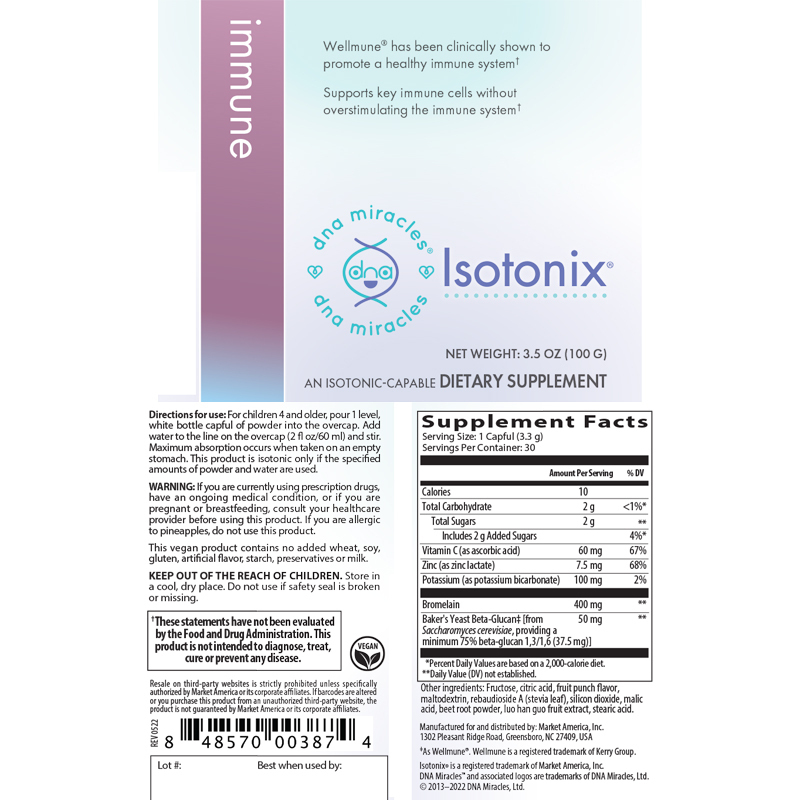 Keeping your child’s body healthy can be considered a full-time job. Often, despite your best efforts, the daily demands of a busy lifestyle create a situation in which extra support for your child’s immune system becomes necessary. With its specific combination of ingredients that support immune health — including the clinically studied Wellmune® — and the unique delivery system offered only by Isotonix , nutraMetrix DNA Miracles Isotonix Immune will not only provide maximum absorption, it will also prime the natural immune response. Using nutraMetrix Isotonix Immune on a daily basis makes it that much easier for children to stay active, strong and healthy throughout the year.

Wellmune® (50 mg)
Wellmune® is a natural yeast beta glucan derived from a proprietary strain of yeast, Saccharomyces cerevisiae . Wellmune® works to support immune cells, which are part of the body’s natural defenses. When Wellmune® is ingested immune cells in the gastrointestinal tract take it up and transport it to the immune organs throughout the body. While there, immune cells, called macrophages, digest the Wellmune® into smaller fragments and slowly release them over a number of days. As they are released, the fragments bind to specific receptors (CR3) on neutrophils, which are the most abundant immune cells in the body.

Wellmune® supports the activity of the neutrophils and prime them for their normal activity in the body, including promoting immune health. It also supports the activity of phagocytic cells, which engulf and destroy foreign bodies, thus promoting immune health. Clinical studies have shown that Wellmune® promotes a healthy immune system. The molecular structure of Wellmune WGP, with its beta 1,3/1,6 branch points, is responsible for its unique biological activity.

Vitamin C (60 mg)
Vitamin C, also known as ascorbic acid,is a vitamin mostly found in fresh fruits and vegetables. Foods that are rich in vitamin C include peppers, citrus fruits and juices, brussels sprouts, cauliflower, cabbage, kale, collards, mustard greens, broccoli, spinach and strawberries. It is important to note that cooking and heat destroy vitamin C. Ascorbic acid is best known for its antioxidant properties. The capacity of vitamin C to support the immune system seems to be common knowledge. The body does not manufacture vitamin C on its own, nor does it store it. Therefore, vitamin C must be acquired through diet and supplementation.

Zinc (7.5 mg)
Zinc is largely found in fortified cereals, red meats, eggs, poultry and certain seafood, including oysters. Zinc is an essential trace mineral that supports approximately 300 different enzyme reactions. Thus, zinc plays a part in almost all biochemical pathways and physiological processes. More than 90 percent of the body’s zinc is stored in the bones and muscles, but zinc is also found in virtually all body tissues. It has been claimed that zinc supports the immune system. Because zinc is involved in such a great number of enzymatic processes it has been found to support a large range of functions, including energy production and cognitive function.

Bromelain (167 mg)
Bromelain is a mixture of enzymes found in the stems of pineapples. It is distinct from the bromelain found in the pineapple fruit. Bromelain is used as a meat tenderizer in one application but has other mechanisms that support various aspects of health. As a mixture of proteases, bromelain has been used by Europeans for many years for its support of normal inflammatory response. Its components work to help support the body’s normal inflammatory response and healing process. One study provided support of bromelain for promoting overall general well-being, along with support of comfort and physical function. There is also support for its role in promoting healthy cells. In some instances, Bromelain works to support the body’s normal digestion of protein but, when taken on an empty stomach, it is not used as a digestive enzyme but supports systemic functions throughout the body.

How do you support a strong immune system?
There are many ways to provide your immune system with general support, including exercise, good nutrition, proper rest and stress management. There are also several nutrients that help promote a healthy immune system, such as vitamin C, zinc and beta glucans.

Which other products are best combined with nutraMetrix DNA Miracles Isotonix® Immune?

What Is The Serving Size Of nutraMetrix DNA Miracles Isotonix® Immune? Pour one level, white bottle capful of the powder into the overcap. Add water to the line on the overcap (2 fl. oz./60 mL) and stir. Maximum absorption occurs on an empty stomach.

Should I take nutraMetrix DNA Miracles Isotonix® Immune every day?
Immune should be taken daily as a dietary supplement. The immune system is an active component of the body, working constantly—as such, you should provide it with constant support to help you maintain optimal health and general well-being.

So far the product is great, helping to keep my immune system strong.

Thank you for taking the time to leave your thoughts on the DNA Miracles Isotonix® Immune! We are happy to hear you are pleased with the product.

I have a very picky 11yr old boy who takes his isotonix every morning, but when I added this immune he's excited about taking his Isotonix, he say's it makes his drink taste better. I will never go without this product! thank you Market America for helping keeping my children healthy.

Thank you for taking the time to leave your thoughts on the DNA Miracles Isotonix Immune! We are happy to hear you are pleased with the product.

The DNA Miracles Isotonix Immune is awesome. I understand the Isotonic mechanism, 2 oz per capful, but it would be interesting to see some new options in the future. Possibly more variety in regards to flavors as well (for the DNA Miracles line).

so in love with this product. high quality ingredients and my kids love the taste!!!

This has been a game changer.