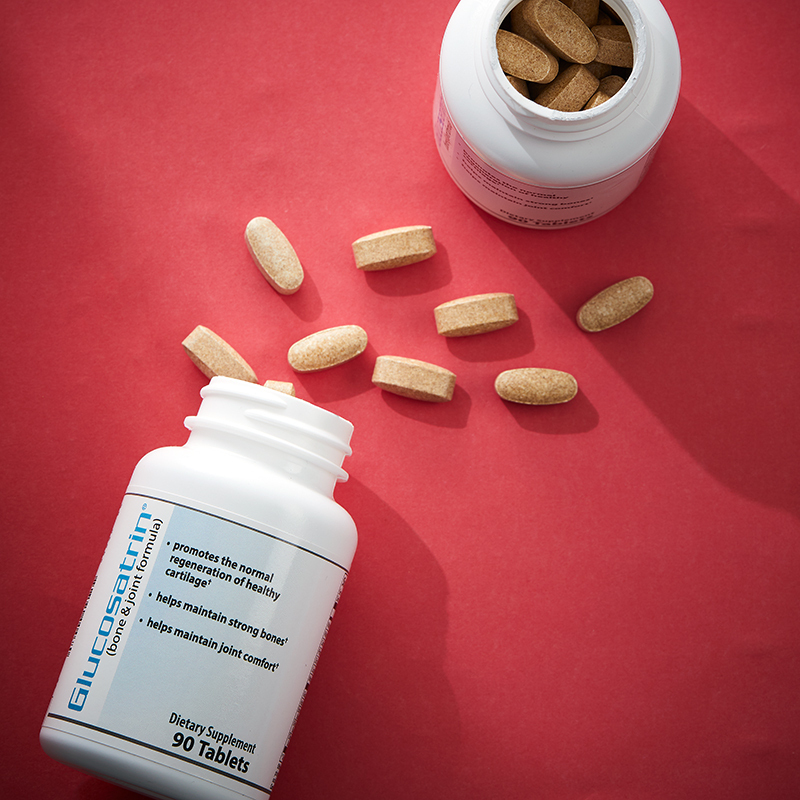 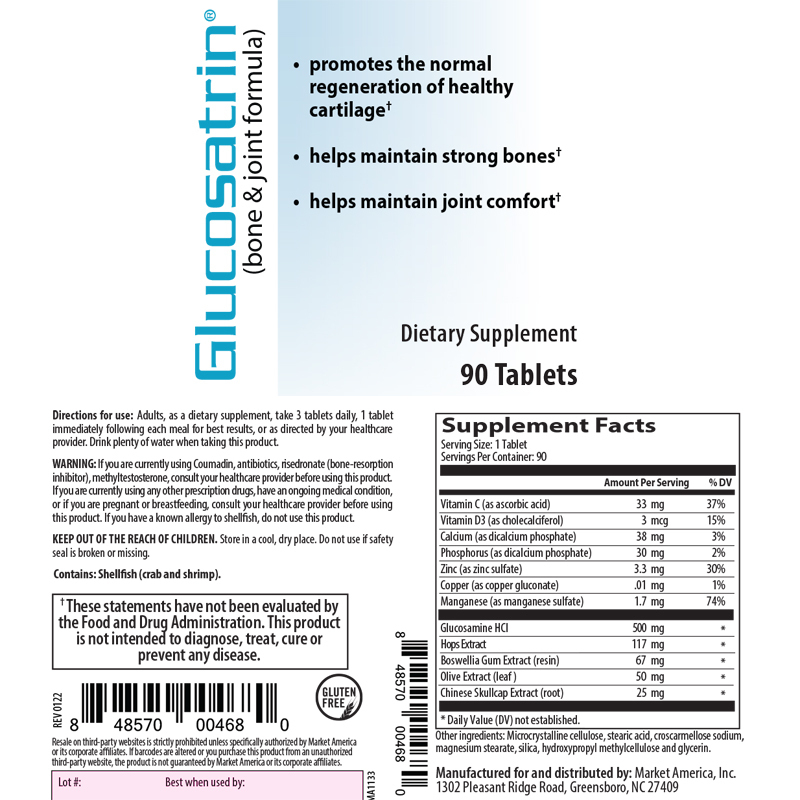 Glucosamine: 500 mg
Glucosamine is an aminopolysaccharide (a combination of the amino acid — glutamine and a sugar — glucose). Glucosamine is concentrated in joint cartilage where it is incorporated in longer chains known as glycosaminoglycans and finally into very large structures known as proteoglycans. Glucosamine is naturally produced by the body and is a key component of cartilage. Glucosamine supports healthy joint function and promotes the normal production of synovial fluid, which lubricates your joints and regenerates cartilage. There are numerous European studies showing a clear benefit of glucosamine supplements for promoting joint health.

Vitamin C: 33 mg
Around 90 percent of vitamin C in the typical diet comes from fresh fruits and vegetables. Some of the best sources are peppers (sweet green and red peppers and hot red and green chili peppers), citrus fruits and juices, brussels sprouts, cauliflower, cabbage, kale, collards, mustard greens, broccoli, spinach and strawberries. Vitamin C is an antioxidant that promotes the normal growth and repair of tissue and supports adrenal gland function and gum health. It enhances immune function, supports the normal absorption of iron and supports cardiovascular health. It has been shown to operate as a signaling molecule to support the normal regulation of the synaptic efficiency of neurotransmitters dopamine and glutamic acid.

Manganese: 1.7 mg
The richest dietary sources of manganese include whole grains, nuts, leafy vegetables and teas. The efficiency of the absorption of manganese is low — around five percent. It may also help to alleviate some PMS symptoms and mood swings. Low levels of manganese in the body can contribute to weakness. Manganese deficiencies are considered rare since it is relatively easy to obtain adequate amounts of manganese through the diet. Interestingly, some experts estimate that as many as 37 percent of Americans do not get the recommended daily amounts of manganese in their diet. This may be due to the fact that whole grains are a major source of dietary manganese, and many Americans consume refined grains more often than whole grains. Refined grains provide only half the amount of manganese as whole grains. Additional benefits of manganese include supporting calcium absorption, helping to maintain healthy blood pressure, promoting the normal formation of bones, supporting fat and carbohydrate metabolism and promoting the normal formation of sex hormones.

Boswellia Resin: 67 mg
The boswellia plant produces a resin that has been used in traditional Indian medicine as a support for joint health. The plant has a long history of safe and effective use for promoting joint comfort. It supports normal mobility. Boswellia resin contains active boswellic acids which have been shown to support healthy cartilage and joint health.

Scutellaria Root: 25 mg
Scutellaria is also called scullcap and is a member of the mint family. There are more than 100 related species of scutellaria throughout North America, Europe and China. In traditional Chinese medicine, scutellaria has been used for supporting healthy joints. Three bioactive flavonoids — baicalin, baicalein and wogonin — have been extracted from scutellaria and are thought to contribute to the major activities of the plant. All three flavonoids have been shown to support healthy joints.

Oleanolic Acid: 50 mg
Oleanolic acid is found in numerous herbs used in Chinese and Ayurvedic medicine. Oleanolic acid is isolated from the seeds of the plant randia dumetornm (rubiaceae). The compound promotes healthy joints. Hops Extract Hops (humulus lupulus) have long been associated with beer and ale, but the beverage originally called ale in English was made from fermented malt only and contained no hops. Although hops’ confirmed value lies in its use for sleep aid, this herb has also been used to stimulate the appetite, support the flow of digestive juices and promote bone health.

Zinc: 3.3 mg
Zinc is largely found in fortified cereals, red meats, eggs, poultry and certain seafood, including oysters. It is a component of multiple enzymes and proteins. It is also involved in the regulation of gene expression. Zinc is an essential trace mineral that has functions in approximately 300 different enzyme reactions. Thus, zinc plays a part in almost all biochemical pathways and physiological processes. More than 90 percent of the body’s zinc is stored in the bones and muscles, but zinc is also found in virtually all body tissues.

Calcium: 38 mg
The highest concentration of calcium is found in milk. Other foods rich in calcium include vegetables such as collard greens, Chinese cabbage, mustard greens, broccoli, bok choy and tofu. Calcium is an essential mineral with a wide range of biological roles. Calcium exists in bone primarily in the form of hydroxyapatite (Ca10 (PO4)6 (OH)2). Hydroxyapatite accounts for approximately 40 percent of bone weight. The skeleton has a structural requisite and acts as a storehouse for calcium. Apart from being a major component of bones and teeth, calcium supports normal muscle contraction, nerve health, heart rhythms, blood coagulation, glandular secretion, energy production and immune system function. Sufficient daily calcium intake is necessary for maintaining optimal bone density, healthy bones and teeth and has been shown to ease the discomfort of PMS in women. When the body does not get enough calcium per day, it draws calcium from your bones. The amount of calcium in the blood is regulated by PTH (parathyroid hormone). High levels of calcium in the body correlate with normal cardiovascular health and normal cholesterol levels. In the American Dietetic Association Journal a study revealed that calcium helped middle-aged women to maintain healthy weight levels.

Thank you for taking the time to share your thoughts on the Glucosatrin® Bone & Joint Health! We are so happy to hear you are pleased with the product!

I love Glucosatrin! My joint stiffness in the mornings is gone. Since I have been taking this product I can feel the difference after working out. My joints aren't as sore. Great product!

Thank you for taking the time to share your thoughts on the Glucosatrin Bone & Joint Health! We are happy to hear you are pleased with the product.