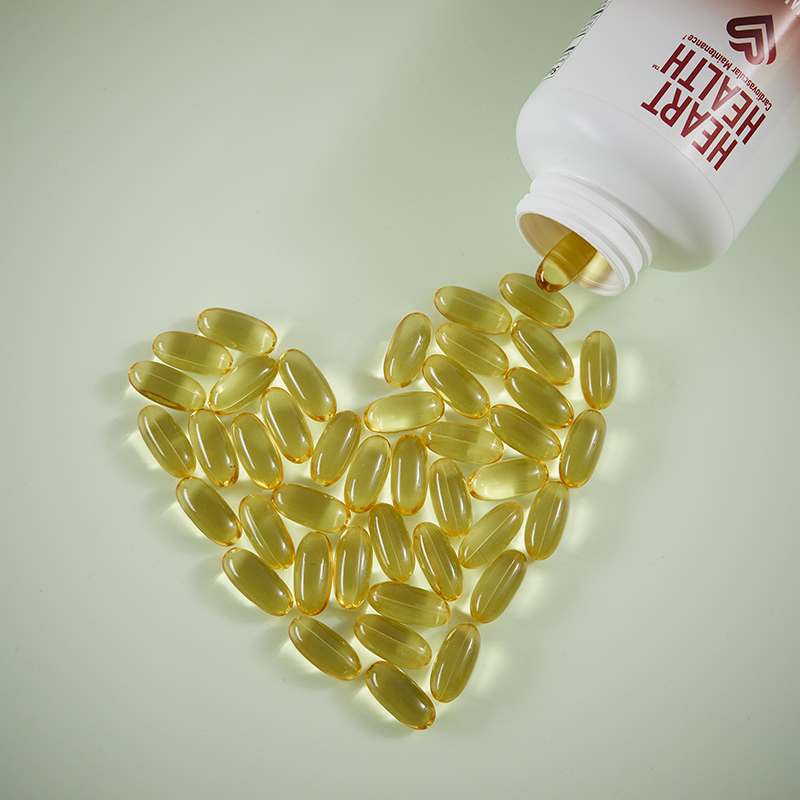 The fish oil in nutraMetrix Heart Health Essential Omega III with Vitamin E comes from sardines and anchovies harvested off the coast of Peru. Not only do anchovies and sardines have a high omega III content, they also have high percentages of eicosapentaenoic acid (EPA) and docosahexaenoic acid (DHA). Anchovies and sardines have a short lifecycle making them an ideal source of fish oil because they are less prone to accumulating environmental toxins that can be found in larger, longer-lived fish. Contaminants are generally extremely low in sardines and anchovies even before they go through an intense purification process. Every batch of fish oil is hand selected and tested prior to processing by our manufacturer and must pass more than 200 quality checks during the production process.

Recent research has shown that that fish oil may be beneficial in supporting cognitive function by helping the body manage stress and enhance mood. It may also promote a healthy complexion. In an article published in The American Journal of Clinical Nutrition , the effects of Omega-3 Fish oil supplementation was shown to be beneficial for healthy cognitive and cardiac functioning. The study shows that supplementing with fish oil daily can rapidly raise the levels of EPA and DHA in cardiac tissue. This is important because both EPA and DHA have been proven to help maintain normal plasma triglycerides. In addition, DHA has been shown to help maintain blood pressure and blood viscosity. This study also showed an inverse relationship between EPA/DHA and arachidonic acid (AA), an omega-6 fatty acid. As EPA and DHA increased in atrial (heart tissue) phospholipids, AA decreased. 1

†According to the FDA, supportive, but not conclusive research shows that consumption of EPA and DHA omega-3 fatty acids may reduce the risk of coronary heart disease.

†According to the FDA, supportive, but not conclusive, research shows that consumption of EPA and DHA omega-3 fatty acids may reduce the risk of coronary heart disease.

Fish Body Oils 3000 mg [EPA† 900 mg and DHA† 600 mg]
Fish oils or marine oils are lipids (fats) found in fish, particularly cold water fish like herring, kipper, mackerel, menhaden, pilchard, salmon, sardine and trout, and phytoplankton. The sources of fish oil in Heart Health™ Omega III Fish Oil are sardines and anchovies, tested by the manufacturer and an independant testing company to be virtually free of mercury lead, PCB and other heavy metals. Fish oils are rich sources of omega-3 long-chain polyunsaturated fatty acids. EPA (eicosapentaenoic acid) and DHA (docosahexanenoic acid) are the two most studied fish oils. DHA is a necessary component of the phospholipids in human cellular membranes, especially those found in the brain and retina. Clinical studies have shown omega-3 fatty acids to help maintain healthy triglyceride levels. A strong correlation has also been shown between fish oil consumption and the ability to maintain healthy levels of C-reactive protein. Fish oils are also important in the maintenance of normal blood flow, as they support normal fibrinogen levels (coagulation or blood clotting), which contributes to normal platelet activity.

Vitamin E (d-alpha tocopherol) 23 IU
The most valuable sources of dietary vitamin E include vegetable oils, margarine, nuts, seeds, avocados and wheat germ. Safflower oil contains large amounts of vitamin E (about two thirds of the RDA in ¼ cup), and there are trace amounts in corn oil and soybean oil. Vitamin E is actually a family of related compounds called tocopherols and tocotrienols. Vitamin E is available in a natural or synthetic form. In most cases, the natural and synthetic forms are identical except the natural form of vitamin E is better absorbed and retained in the body. The natural form of alpha-tocopherol is known as "d-alpha tocopherol." The synthetic "dl-" form is the most common form found in dietary supplements. For those individuals watching their dietary fat consumption, which is relatively common in the world of dieting, vitamin E intake is likely to be low, due to a reduced intake of foods with high fat content.

The main health benefit of supplemental vitamin E comes from its immune-boosting antioxidant activity. It supports a healthy cardiovascular system. Vitamin E is one of the most powerful fat-soluble antioxidants in the body. In turn, vitamin E protects cell membranes from free radical. Vitamin E is commonly added to fish oil supplements to provide antioxidant protection of DHA and EPA.

†According to the FDA, supportive, but not conclusive, research shows that consumption of EPA and DHA omega-3 fatty acids may reduce the risk of coronary heart disease.

What does lifestyle have to do with heart health? There are simple, everyday things you can do to help maintain proper heart health. Among these are:

Is this product vegetarian?  No. This product contains gelatin and fish oils.

Thank you for taking the time to share your thoughts on the Heart Health™ Essential Omega III Fish Oil with Vitamin E! We are happy to hear you are pleased with the product.

in my opinion the greatest fish oils available

Thank you for taking the time to share your thoughts on the Heart Health Essential Omega III Fish Oil with Vitamin E! We are happy to hear you are pleased with the product.

This fish oil is a bomb that nothing can compares with it. I have been taking this vitamins for more than 3 years and it has been keeping my Blood Pressure in check and so with my cholesterol level. i referred this to a lot of friends and to this day, they are a customer. Thank for making this product. It is highly recommended to anyone

Thank you for taking the time to share your thoughts on the Heart Health™ Essential Omega III! We are happy to hear you are pleased with the product.

Thank you for taking the time to share your thoughts on the Heart Health Essential Omega III Fish Oil with Vitamin E! We are happy to hear you are pleased with the product.

This is the best fish oil on the market.

Thank you for taking the time to share your thoughts on the Heart Health™ Essential Omega III Fish Oil with Vitamin E! We are happy to hear you are pleased with the product.