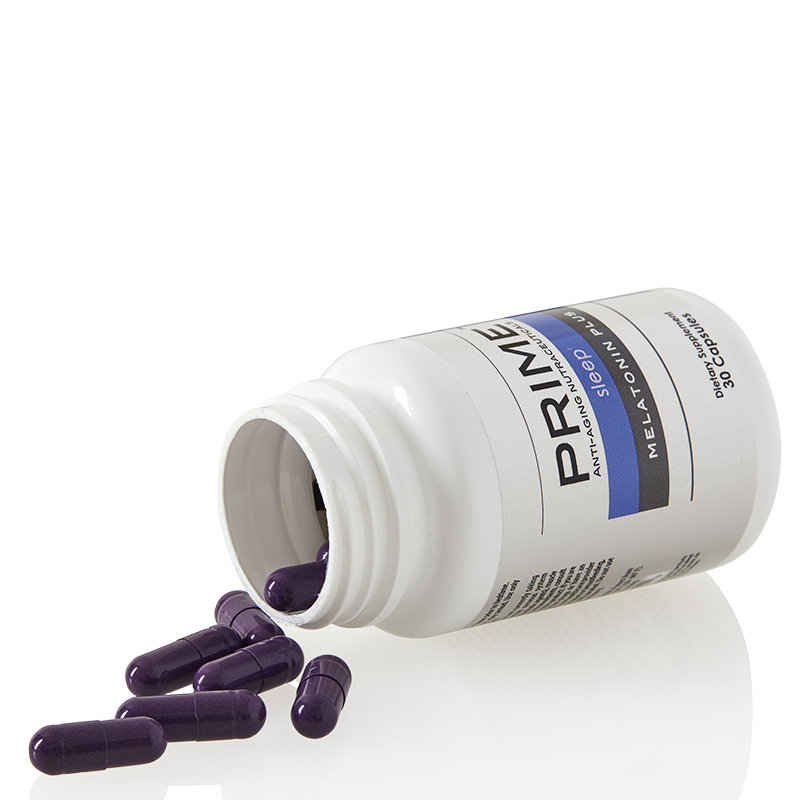 Sleep deficiency—don’t we all know it. Whether the cause is stress or even something as simple as an unconventional work schedule, sleep deficiency takes a toll on both the mind and body.

Sleep, restful sleep, plays a vital role in the strength and wellness of your being. Simply sleeping is not enough— restful sleep is the key to clarity and a properly functioning mind. The way you function, think, and feel overall when you’re awake depends on the quality of sleep you’re getting. It is during the time that you are asleep that your body does its hardest work as it presses the “reset” button and prepares you for a new day! No interruptions, no distraction, just relaxing and restful sleep.

Composed of complementary ingredients such as valerian root extract, hops extract, and an effective amount of melatonin, Prime™ Sleep is formulated to help you with the total quality of your sleep. Sometimes, as bad as we may want to sleep, it can seem impossible! Then, once asleep, it is important to stay asleep, so you can reach each vital stage of sleep.  Prime™ Sleep will help you relax and drift off to sleep. It may help you stay asleep throughout the night and improve your sleep quality, so you wake up feeling refreshed and revitalized.

Sleeping shouldn’t be a chore—it’s about time you started resting with ease! Make the most of your rest with nutraMetrix Prime™ Sleep.

Valerian Root Extract (Valeriana officinalis): 150 mg
Valerian is a perennial plant native to Europe and Asia and grown in North America, that can grow over 6 feet tall, with small pink to white flowers. The roots and rhizome of valerian are used in dietary supplements to promote sleep. Valerenic acid and other constituents of valerian may inhibit the enzyme system responsible for the central catabolism of gamma-aminobutyric acid (GABA), thereby supporting GABA concentrations and promoting relaxation. *

Hops Extract (Humulus lupulus): 50 mg
Hops are cone-like structures of Humulus lupulus, a vine that is native to Eurasia and temperate regions of North America. Humulus lupulus is also grown in parts of South America, South Africa, and Australia. The term "hops" originates from the Anglo-Saxon term "hoppan", meaning "to climb." Hops extracts and oils are used in food and beverage as flavor components and are also used in dietary supplements to promote sleep. Hops may promote relaxation effects by helping to promoting normal levels of gamma-aminobutyric acid (GABA), an inhibitory neurotransmitter in the central nervous system. *

Melatonin: 10 mg
Melatonin is a neurohormone produced in the brain by the pineal gland.  The synthesis and release of melatonin are stimulated by darkness and suppressed by light, suggesting the involvement of melatonin in the circadian rhythm and regulation of diverse body functions. Levels of melatonin in the blood are highest prior to bedtime.  It is found in animals and, in much lower concentrations, in plants.  Melatonin is synthesized endogenously by the pinealocytes of the pineal gland, and the essential amino acid L-tryptophan is a precursor in its synthesis.  Melatonin supplementation has become popular to support sleep. It has also been known to assist with jet lag. *

L-Tryptophan: 5 mg
In the body, tryptophan is converted into 5-hydroxytryptophan, which then can be converted into serotonin. The body cannot naturally produce this amino acid; therefore, it must be a part of the diet or ingested through supplementation. Tryptophan is a component of many animal and plant proteins. Food sources of tryptophan are dairy products, beef, poultry, barley, brown rice, fish, soybeans and peanuts.

L-Theanine: 5 mg
L-Theanine is the major amino acid found in green tea, historically used for its relaxing effects. Theanine may work for relaxation by promoting normal levels of gamma-aminobutyric acid (GABA), serotonin and dopamine. In the central nervous system, GABA is the primary inhibitory neurotransmitter which promotes calming effects at the cellular level. Dopamine supports the normal regulation of many functions within the brain regarding behavior, cognition, sleep, mood, attention and memory. *

*These statements have not been evaluated by the Food and Drug Administration. This product(s) is not intended to diagnose, treat, cure or prevent any disease.

What causes the occasional inability to sleep?

How much sleep do I need?

Adults should try to get eight hours of sleep each night. More important than the exact length of time in bed is feeling rested when awakening and having energy throughout the day. If not, make changes to your sleep environment and allow more time for sleeping.

What are the benefits of good sleep?

Sleeping well each night will reduce stress and irritability, improve your energy and concentration, and support your immune system.

nutraMetrix Prime Sleep should only be taken occasionally as needed to reduce the length of time it takes to fall asleep. If you feel the need to take Prime Sleep more than four nights in a seven-day period, you may have a serious sleep disorder and should consult your physician.

Will this product cause next day drowsiness?

As with all sleep aid supplements, there is a possibility to feel the effects the following day. However, if taken as directed, allowing adequate time for a full night's sleep you should feel well rested and ready for the day!*

Will this interact with any other supplements or medications I take?

On those day where I had just a little bit too much caffeine.... or am ruminating about some problem... this works beautifully. It kind of hypnotically eases me into sleep.

Do note... I take 1 cap of Isotonix magnesium every evening, that is generally enough to relax me... But I add Prime Sleep as needed to give me an added push into Slumberland. 5 stars...

Thank you for taking the time to share your thoughts on the nutraMetrix® Prime™ Sleep! We are so happy to hear you are pleased with this product.

This product works! I fell asleep easily and stayed asleep. So happy I purchased this.

Thank you for taking the time to share your thoughts on the nutraMetrix Prime Sleep! We are happy to hear you are pleased with the product.

Thank you for taking the time to share your thoughts on the nutraMetrix Prime Sleep! We are happy to hear you are pleased with the product.