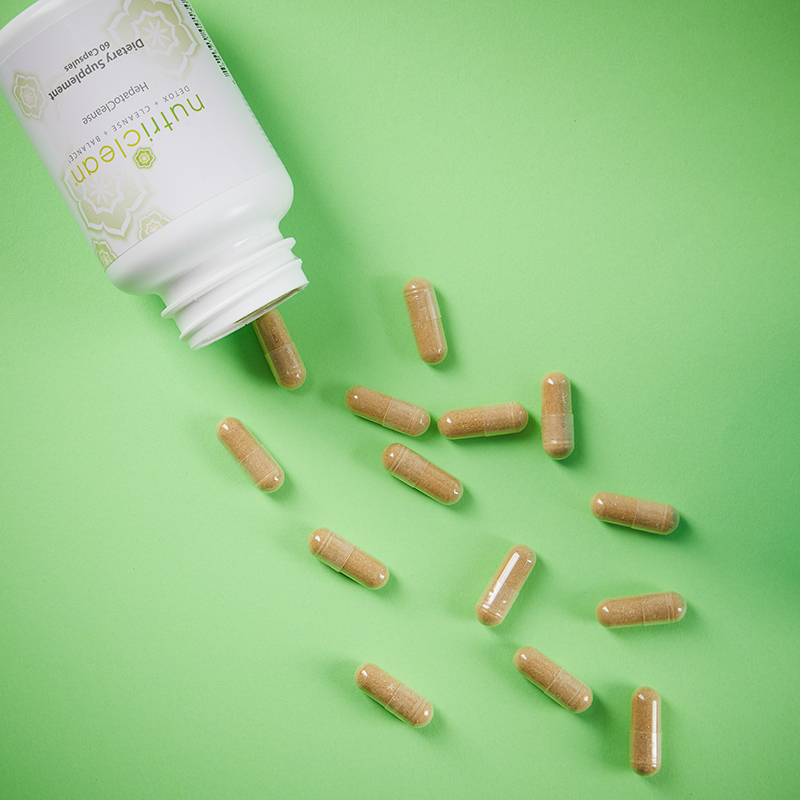 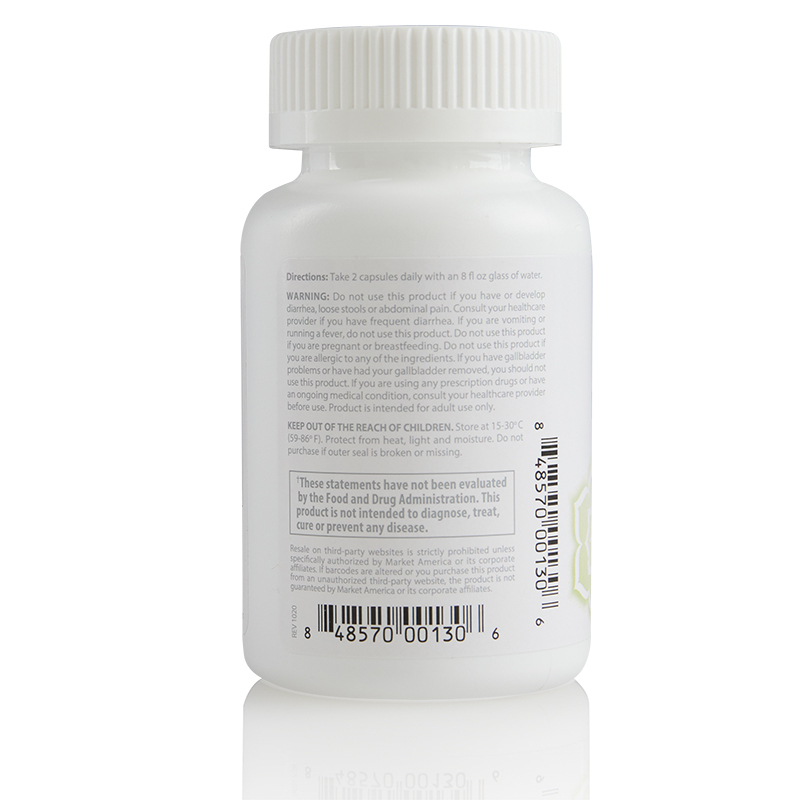 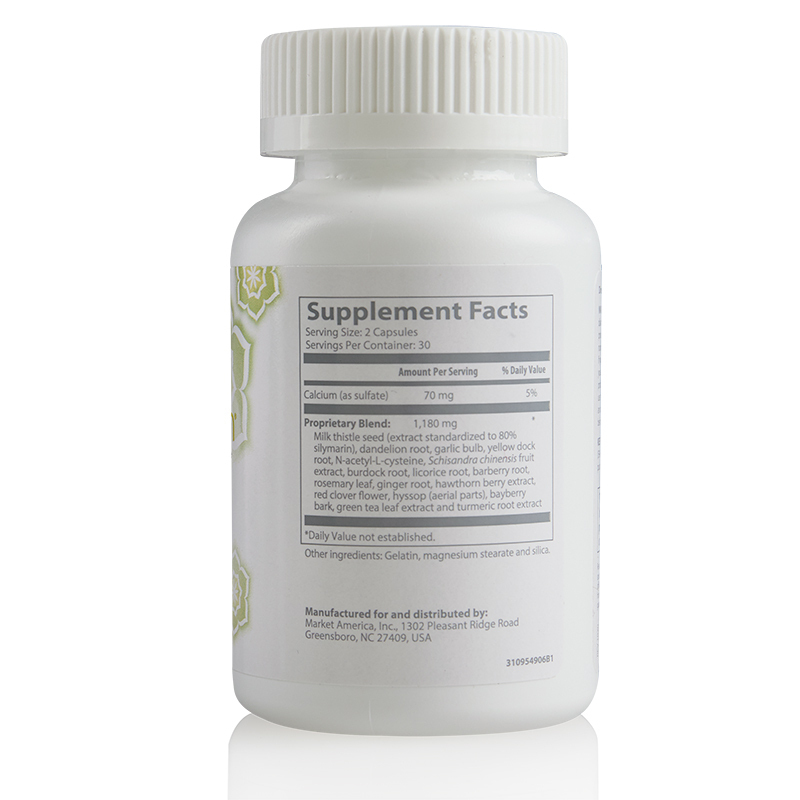 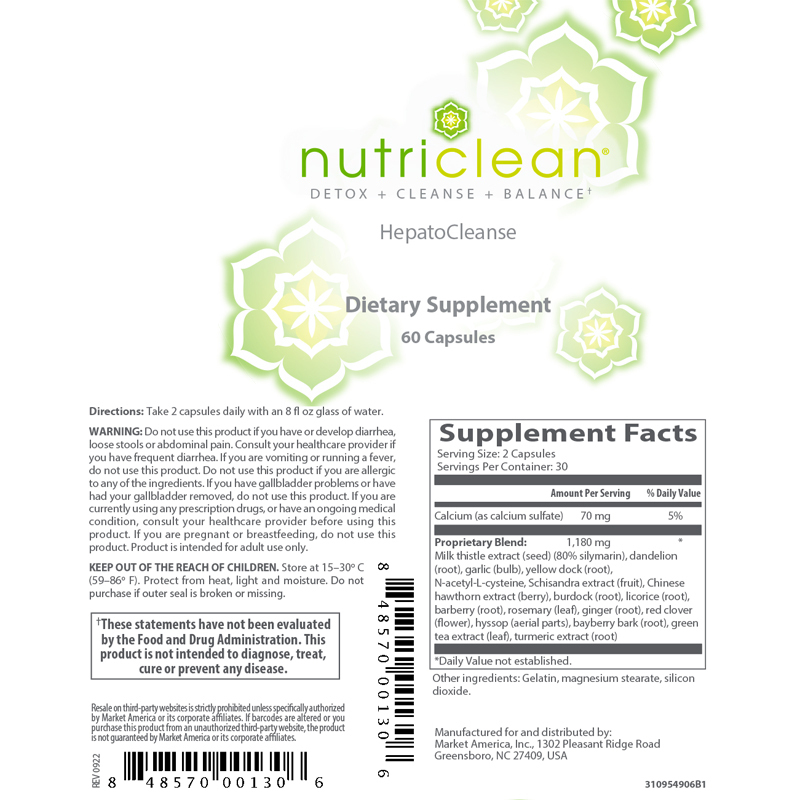 nutraMetrix NutriClean HepatoCleanse is a dynamic way to help the liver reach optimal levels of functioning and detoxification. As a part of NutriClean 7-day Cleansing System, HepatoCleanse can be used as a part of the system or alone, as a maintenance dietary supplement, which contains a unique, proprietary formula designed to help you maintain proper liver health.

Why is the liver so important? The liver is one of the most important organs in the body. It is the way the body eliminates many unnatural, detrimental substances that enter the body on a consistent basis. Maintaining optimal liver health is a must in modern times, where free radicals, toxins and harmful chemicals bombard the body daily. The liver's function is to sort out, and eliminate, all of these harmful substances, removing them from the body. The body regularly does this to stay healthy and, more importantly, alive. Internally, the liver must break down compounds, such as excess hormones and other byproducts of a healthy metabolism. Externally, the liver must filter and eliminate foods, food preservatives and added chemicals, pollutants, pathogenic toxins, and excessive alcohol. Lifestyle factors that we may or may not be able to control, such as genetics, diet, environment and stress, can influence the proper functioning of the liver resulting in less than optimal elimination and filtering of subsequent toxins.

I don't drink a lot of alcohol. Do I need to take NutriClean HepatoCleanse?   No one is excluded from the harmful chemicals, pollutants and hidden preservatives found in everyday life that can wreak havoc on an otherwise healthy liver. The liver is a precious organ and deserves the best treatment in the way of maintenance or toxin overload. The herbs found in HetpatoCleanse work with this crucial organ in efforts to totally cleanse the blood as the liver filters out the substances that can have an impact on all body systems and organs as things are transported from the liver into the bloodstream.

How does nutraMetrix NutriClean® HepatoCleanse encourage liver detoxification? Hepatocleanse contains proven herbs and botanicals that encourage the liver's detoxification of harmful toxins that have built up, hindering optimal liver functioning. The function of the liver is to eliminate a variety of chemicals from the body. Toxins enter the body and are then transformed by enzymes into molecules that can be eliminated from the body via the digestive tract. These enzymes that help in breaking down and eliminating harmful toxins are primarily activated through ingesting certain things through the diet or through supplementation. NutriClean contains milk thistle seed, which contains silymarin that works to promote liver health through its free-radical scavenging ability, ability to stimulate liver cell regeneration and prevention of toxin uptake by liver cells. Alongside milk thistle, N-Acetyl-L-Cysteine protects the liver from free radicals and when incorporated into the tri-peptide glutathione, acts as a potent antioxidant and conjugating agent for eliminating toxins. The herb schizandra cleanses and detoxifies the liver. It stimulates the body to make more glutathione and helps protect the liver against various toxins. Garlic, rosemary, ginger, berries, and green tea are included in the HepatoCleanse formula, also helping to cleanse and detoxify the liver. The powerful blend of herbs and botanicals in HepatoCleanse goes a long way in ensuring thorough liver health, cleansing and purifying toxins out of the body, and paving the way for maximum liver functioning.

How do I take nutraMetrix NutriClean® HepatoCleanse? One should take two capsules a day with a full 8 oz. glass of water. If you notice you are having diarrhea or an upset stomach, discontinue use.

What is glutathione and how is it helpful to the liver?  The herbs found in HepatoCleanse help the body to generate glutathione. Glutathione is necessary to the enzymatic reactions that must take place in order for proper filtration and elimination of bodily toxins. Glutathione is also known as a Phase II enzyme in that it bonds with separate Phase I enzymes in making the filtered products more soluble for elimination through the bile or the kidneys.

HepatoCleanse capsules are a combination of special botanicals and nutrients that can help support healthy liver function.* The liver is the body's primary filter for toxins. The filtering process is achieved through a coordinated effort of two families of enzymes known as cytochrome P450s and conjugation enzymes. These enzymes can underperform due to a poor diet, excessive alcohol consumption, and chronic stress. The cytochrome P450 enzymes split molecular oxygen (O2) and create activated oxygen radicals to react with a foreign compound. The conjugation enzyme can then act upon the oxidized compound and add other types of molecules to make the foreign compound more water soluble and excretable.*

Milk thistle promotes liver and gallbladder health by providing free radical scavenging activity and support for normal liver cell regeneration. Milk thistle has shown to demonstrate strong, supportive activity when various toxins challenge liver cells. Milk thistle promotes a healthy liver by supporting the normal regeneration of liver tissue and helping the body maintain healthy levels of bile cholesterol. It contains the compound, silymarin, a powerful antioxidant that scavenges free radicals. Additionally, it has shown to promote kidney health and may support the prostate gland. The name silymarin is a general term for the active chemicals known as flavonolignans. These chemicals are only in the seeds of milk thistle plant. Silymarin, as well as an isolated form of flavonolignan known as silybin, can support a healthy liver and promote the body’s natural ability to combat toxins such as alcohol, environmental toxins and poisons. There is preliminary evidence that silymarin may support healthy serum transaminase levels and liver health. There are many studies that indicate silymarin’s effectiveness in promoting cleansing the liver.*

N-Acetyl Cysteine (NAC) comes from the amino acid cysteine. One of NAC’s key functions is its metabolism for intracellular glutathione (GTH), one of the body’s primary cellular antioxidants. GTH not only acts as a reducing agent and antioxidant in the body, it is also known to detoxify chemicals into less harmful compounds, support the normal transport of nutrients to the lymphocytes and phagocytes (two major types of immune cells), and promote the health of cell membranes. Many experts consider NAC to be a top source of increasing GTH levels. Additionally, reviews of studies that confirm NAC’s conversion of GTH in the body show that oral NAC supplementation can enhance levels of glutathione in the liver, plasma and the bronchioles of the lungs. The body produces NAC naturally.*

Dandelion root has shown in studies to support a healthy liver, kidney, gallbladder and digestive system. The bitter properties of dandelion promote healthy liver function by supporting healthy bile production in the gallbladder as well as bile flow from the liver. The support of normal bile flow may also help support healthy fat metabolism in the body. Dandelion root may also help support a healthy appetite and a healthy digestive system, and dandelion compounds have shown to protect against oxidative stresses and support normal antioxidant enzyme status.*

Hawthorn berry is an herb that has historically been used to help with digestive health. Today it is mainly known to promote cardiovascular health by supporting normal blood flow and helping to maintain normal blood pressure.  It also has antioxidant properties and helps to maintain healthy collagen matrices of arterial walls so that the vessels maintain elasticity.*

Schizandra is an herb that has been used to promote overall health and well-being for centuries. Among its many benefits, it promotes liver and kidney health. Schizandra is part of the adaptogen family containing compounds believed to promote balance in the body. It contains lignans, which may support the immune system, liver health and the body’s ability to cope with stress.*

Licorice is an ingredient used to support the health of many areas of the body. One of its perceived health benefits is promoting digestion and gastrointestinal health.*

Herbalists have long used rosemary to support healthy energy levels and help with normal digestion. It is also used to support a healthy appetite, liver and gallbladder, and help maintain normal blood pressure. Some less than conclusive evidence hints that rosemary, or its constituents, may have antioxidant effects.*

Ginger contains a root from which uses for this plant originate.  For years, ginger has been used medicinally to support gastrointestinal health and healthy bowel movements. Ginger may also support a healthy cardiovascular system.*

Green tea is long known for its health properties for centuries in India and China. A number of beneficial health effects are related to regular consumption of green tea. The active components in green tea are a family of polyphenols and flavonols that possess antioxidant activity, including tannins and catechins. Several catechins are present in major quantities: epicatechin (EC), epigallocatechin (EGC), epicatechin gallate (ECG), and epigallocatechin gallate (EGCG). EGCG appears to be the most powerful of all the catechins. Green tea extract may also provide cardiovascular system support by helping to maintain normal cholesterol levels and triglycerides levels.*

The herb hyssop (Hyssop officinalis) has a long history in both religion and health. Its health benefit is promoting digestive health.*

Red clover is a member of the legume family and contains isoflavones. Isoflavones have antioxidant properties and may help maintain normal cholesterol levels.*

In traditional Ayurvedic care, turmeric is thought to support overall health. It is used as a dietary supplement to support gastrointestinal and liver health. The primary active compound in turmeric is curcumin, which helps deliver its antioxidant properties.*

I usually sleep late and every time I take this I find it a lot easier to wake up in the morning!!
Highly recommend and take two every night

Thank you for taking the time to share your thoughts on the NutriClean HepatoCleanse (Liver Support Formula)! We are happy to hear you are pleased with the product.

We all need help with detoxification!

I use this in the detox kit once a quarter. As I get older, I've started using it more to help my liver detox. So glad it's in our product line.

Thank you for taking the time to leave your thoughts on the NutriClean HepatoCleanse! We are happy to hear you are pleased with the product.

Love your Liver and it will treat you well

Too many people just don't understand that everything is connected within your body. Your liver is so important in ridding your body of toxins. It needs to remain working efficiently to remain healthy, so give it the key ingredients that do exactly that. Key ingredients including milk thistle, that is a standardized extract so that you can be sure to get the same quality product each time you buy it. Love it and thank you for putting such a strong product together.

I have been using this product for almost two years. It is a great product!

I use to have fatty liver, liver enzymes were abnormal.. Within 2 months I experienced remarkable results! this is an awesome product!