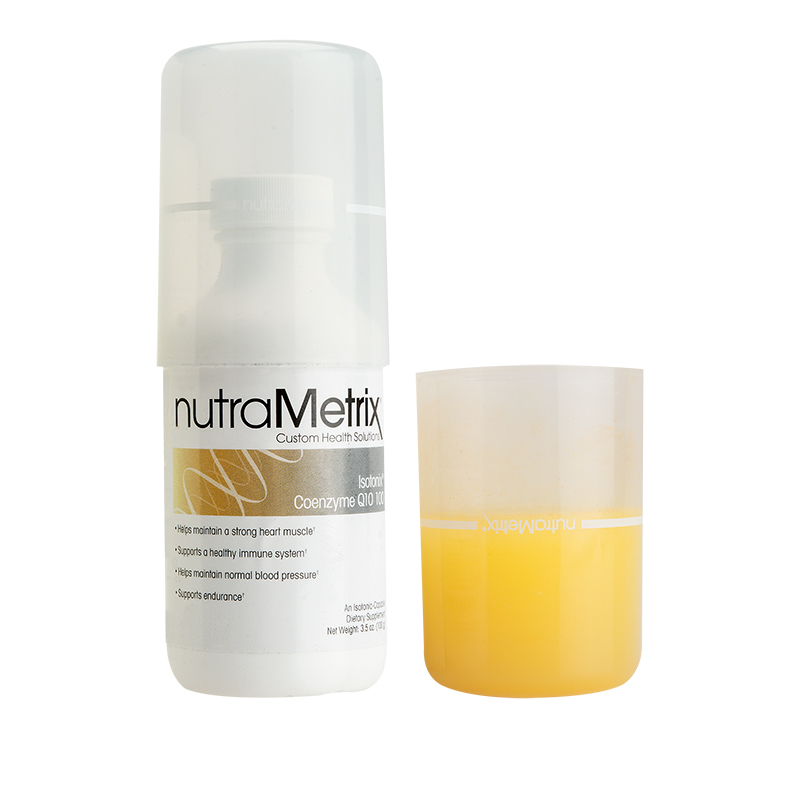 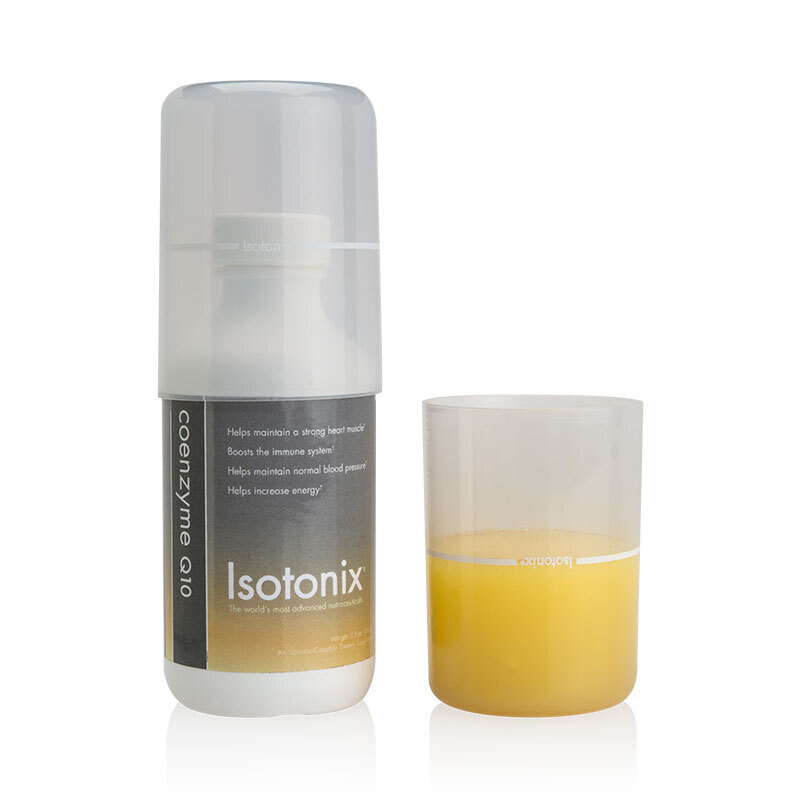 A person’s heart beats, on average, 100,000 times each day, which adds up to about 36 million times per year. Coenzyme Q10 is the vital nutrient that promotes the body’s normal ability to create energy at the cellular level, which powers the heart and the body’s energy production cycle. Coenzyme Q10 acts as a powerful antioxidant when combined with vitamin E. Within a cell, it serves as a carrier of electrons in the electron transport chain, neutralizes free radicals and helps protect the integrity of the mitochondrial membrane.*

As individuals age, the ability to synthesize coenzyme Q10 begins to decline. Sometimes this is due to poor eating habits or stress, but the main challenge for most people is the ability to choose the right foods containing Coenzyme Q10, as well as the other nutrients needed to manufacture it in the body. It is a combination of both that provides the body with the best possible amount of Coenzyme Q10 for optimal health.*

Absorption and efficacy of nutritional supplements are two important features to examine when selecting a nutritional supplement, and nutraMetrix Isotonix Coenzyme Q10 contains both. This supplement is in the form of an isotonic fluid, which helps the nutrients to be absorbed into your system quicker. Since the antioxidants are in an isotonic solution, it minimizes the chance that important nutrients will be trapped by fats, fibers and tannins, or inactivated by a highly acidic pH level.

How To Take and Store nutraMetrix® Products*

Coenzyme Q10: 100 mg
Coenzyme Q10 belongs to a family of substances called ubiquinones and is a water-insoluble, wax-like substance that is part of the respiratory chain. It is synthesized in the cells and is involved in electron transport and energy production in mitochondria. In the cellular system, it functions to generate energy from oxygen, in the form of ATP, for bodily processes. CoQ10 also exhibits activity as a free radical scavenger and an antioxidant. The antioxidant activity in the mitochondria and cell membranes protects against peroxidation of lipid membranes. Combining CoQ10 with vitamin E generates a synergistic antioxidant effect on lipoprotein and spares the vitamin E.

Coenzyme Q10 can be found in spinach, broccoli, nuts, meats and fish. In the body, it is found in the highest concentration in the cells of the heart, liver, kidney and pancreas. Supplementation of CoQ10 might be beneficial mostly to adults, because the levels of it in the body tend to peak around the age of 20 and then decline with age. The affects of supplementation with CoQ10 have shown to be especially helpful in maintaining heart health.

Vitamin E: 134 mg
Since vitamin E is one of the most powerful, fat-soluble antioxidants in the body, it helps protect cell membranes from the effects of free radicals. High intake of vitamin E have been found to support a healthy heart. Vegetable oils, margarine, nuts, seeds, avocados, wheat germ and safflower oil are all good food sources of vitamin E. Vitamin E is linked to a healthy heart, enhancement of immune system function and support of healing.

Lipase: 5 mg
Lipase is a fat-digesting enzyme that supports the body’s ability to break down dietary fats into an absorbable form. It is a water-soluble enzyme that catalyzes the hydrolysis of ester bonds in water-insoluble, lipid substrates. Lipase, such as human pancreatic lipase, support the conversion of triglyceride substrates found in oils from food to monoglycerides and free fatty acids. Lipases are ubiquitous in living organisms, and most are built on an alpha/beta hydrolase fold and employ a chymotrypsin-like hydrolysis mechanism involving a serine nucleophile, an acid residue and a histidine. Some lipases also work within the interior spaces of living cells to promote the normal degradation of lipids.

Riboflavin (Vitamin B2): 3 mg
Vitamin B2, also known as Riboflavin, is a water soluble vitamin that’s primary function is as a coenzyme to support metabolic processes in the body. It promotes healthy red cell formation, nervous system function and also acts as an antioxidant. Another key function of the vitamin is in the production of energy, where it acts as part of the electron transport chain that produces cellular energy. In the mitochondrial electron transport chain, vitamin B2 is an intermediate hydrogen acceptor of foodstuffs and then passes the electrons onto the cytochrome system where the cellular energy is produced.

Requirements for vitamin B2 are associated with calorie intake because with an increased food intake, your body also needs an increase of vitamin B2 to carry out the metabolic processes that will convert the food into usable energy. Nutritional inaccuracy is a common cause of vitamin B2 deficiency, which can occur in the elderly. Foods that are rich in the vitamin B2 are organ meats, eggs, milk, cheese, yogurt, leafy green vegetables and whole grains.

Potassium (Bicarbonate): 115 mg
Potassium, in the body, is classified as an electrolyte and is involved in electrical and cellular functions in the body. It promotes normal water balance, levels of acidity, and maintenance of blood pressure, transmission of nerve impulses, digestion, muscle contraction and heartbeat. Potassium can be found in foods, which help to maintain the body’s internal balance of fluids and chemicals. Some potassium-enriched foods are fruits, vegetables and legumes, which are all commonly recommended for optimal heart health.

What is Coenzyme Q10?
Coenzyme Q10 is actually a two-part compound that is composed of (1) a long, fat-soluble isoprenoid tail that anchors the molecule in the inner membrane of the mitochondria and (2) a quinone that is capable of accepting and transferring electrons through a portion of the respiratory chain. A coenzyme is a non-protein substance that helps enzymes carry out their metabolic function and is not consumed in the reaction. The "Q" stands for quinone and the "10" stands for the number of isoprenoid units in the tail portion of the molecule. Mammals generally have 10 isoprenoid units in the tail portion, but other non-mammalian species may have fewer units. Coenzyme Q10 is a critical biochemical link in the production of energy in the cell. Coenzyme Q10 is found in the cell membranes of all cells in our body, particularly in the inner mitochondrial membranes, and it is especially concentrated in highly active organs, such as the heart, lungs, kidneys, spleen, and adrenal glands. The mitochondria produce large amounts of adenosine triphosphate (ATP), which helps cells perform work.*

Since the manufacture of adenosine triphosphate (ATP) in the mitochondria is known to generate many oxygen radicals, coenzyme Q10 serves an antioxidant function in that location by neutralizing radicals. Coenzyme Q10 also promotes the Kreb's cycle (Citric Acid Cycle), which converts both carbohydrates and fat into usable energy for the cell.*

Besides these functions within all cells, coenzyme Q10 also works with vitamin E outside of the cell when both compounds are dissolved in circulating low-density lipoprotein (LDL) particles carrying cholesterol. These two fat-soluble antioxidants promote arterial health.*

What is the source of Coenzyme Q10?
While our livers produce small amounts of coenzyme Q10 and this small amount is distributed to the rest of the body, we get most of this compound from foods such as organ meats, muscle meats, fish, peanuts, spinach, soy and nuts. In the past, it was difficult and very expensive to isolate sufficient amounts of coenzyme Q10 from these food sources for the purpose of dietary supplementation. However, a Japanese company succeeded in synthesizing coenzyme Q10 in 1977, thus making an important nutrient available to the world.

What is a safe and effective dose of supplemental Coenzyme Q10?
A variety of clinical studies has demonstrated that daily servings of as low as 30 mg and as high as 300 mg of coenzyme Q10 are safe and can promote a healthy life. The circulating levels of coenzyme Q10 take about 60-90 days to reach steady state, depending on the serving size taken. Granular coenzyme Q10, as used in Isotonix®, is about equal to the oil-based form in terms of uptake from the small intestine and distribution throughout the body.*

This truly is just one of my favorites! I have added this to my daily life support cocktail. Feeling confident in what I’m taking is a great thing. Your Isotonic delivery is amazing. Thank you. My health depends on you !!!

Dear Valued Customer-
Thank you for taking the time to share your thoughts on the Isotonix® Coenzyme Q10. We are so happy to hear you are pleased with this product!
Thank you again!
The Product Information Team

Thank you for taking the time to share your thoughts on the Isotonix Coenzyme Q10! We are happy to hear you are pleased with the product.

Great product so far. Great addition to my wellness regimen

I love this product and have taken pills for years but much rather take isotonix version. The only negative os that it is only sold in a 30 serving size. Please make a 90 serving size available. It is costly but not as costly as poor health and failing organs. perhaps if you can bottle 90 servings, the cost could be less than 3 times the 30 serving.