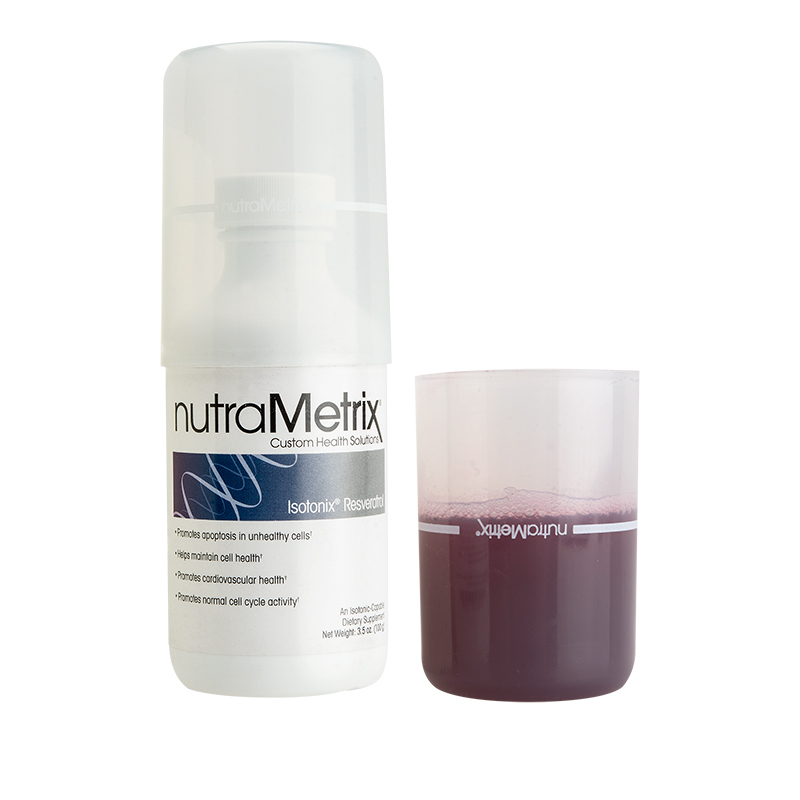 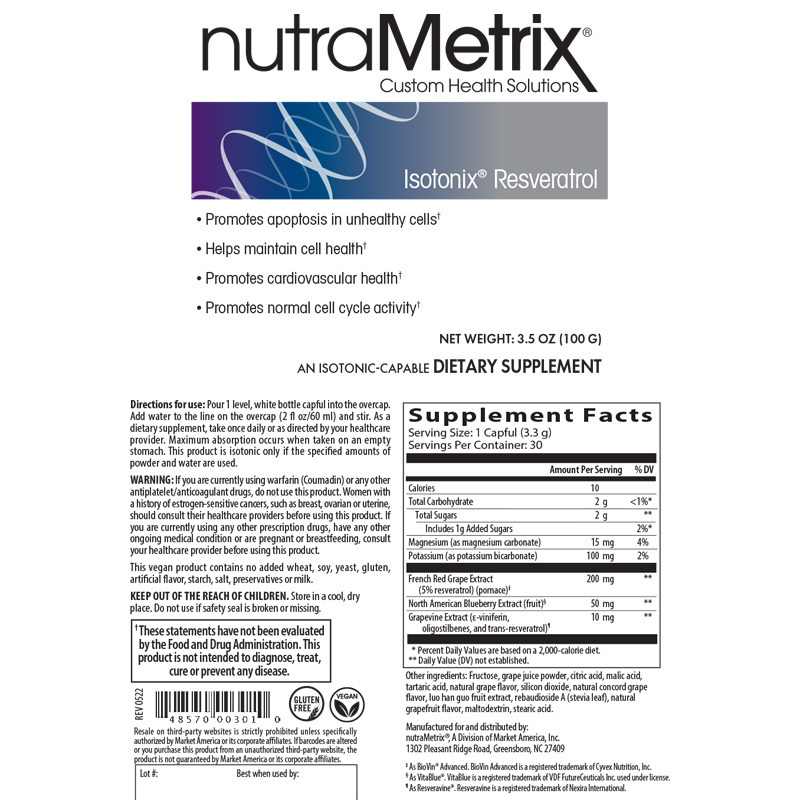 Poor cellular and cardiovascular health is becoming a worldwide epidemic. An unhealthy diet of processed, high-calorie, high-fat foods, pollution, smoking, and sedentary lifestyles all contribute to poor cell and heart health. Scientists revealed The French Paradox, which states that even though the French drink, smoke and eat high-fat foods, they have some of the lowest incidences of poor cardiovascular and cellular health. Scientists attribute this to the large amounts of red wine that the French consume or, more importantly, an extract found in red wine: resveratrol. Resveratrol is an ingredient with incredible clinical research, revealing it supports cardiovascular and normal cell health. Because wine is so highly processed, the actual amount of resveratrol is quite low. One would have to drink at least three bottles of red wine a day to experience the effects of resveratrol extract. Additionally, the content of resveratrol in red wine is inconsistent and varies by type of wine, region and processing techniques. Resveratrol extract or more specifically, Resveravine®, which is a more concentrated form of resveratrol, ensures that the body reaps all of the benefits of resveratrol, without the ill effects from three bottles of wine.

nutraMetrix® Isotonix Resveratrol is an isotonic-capable supplement made from three patented ingredients: Resveravine with 20% resveratrol extract, BioVin® Advanced with 5% resveratrol extract, and VitaBlue® (wild blueberry extract), designed to promote normal cell health. Isotonix Resveratrol works to maintain cell health, promote normal cell cycle activity, promote apoptosis (programmed cell death) in unhealthy cells, support the normal activity of the SIRT-1 gene, and promote cardiovascular health by promoting healthy platelet activity, promoting vasorelaxation, and providing antioxidant protection of LDL particles. Resveravine is a combination of trans- resveratrol (20% purity) and viniferin extracted from vine stems, which work synergistically to enhance the effectiveness of resveratrol extract. Trans-resveratrol is the predominate isomer found in red wine grapes and juice, and Resveravine is 100 to 300 times more concentrated in trans- resveratrol than other products from grape skin. According to the Linus Pauling Institute at Oregon State University, trans-resveratrol may have a higher bioavailability than other isomers of resveratrol. Resveravine provides a higher level of free radical defense against oxidative stress, stronger promotion of normal cellular activity and higher antioxidant protection of LDL particles than pure resveratrol extract.

Magnesium (Carbonate): 200 mg
Magnesium, an essential mineral, promotes normal bone, protein and fatty acid formation, cell formation, activation of B vitamins, muscle relaxation, blood clotting, and formation of adenosine triphosphate (ATP; the energy the body runs on). Magnesium promotes the health of bones (64 percent of the body's magnesium is concentrated in the bones). It supports normal bone structure and plays an essential role in more than 300 cellular reactions. Magnesium may help maintain normal blood pressure and muscle comfort during pregnancy.

Wild Blueberry Extract (VitaBlue®): 50 mg
Blueberries rank highest among many fruits and vegetables for ORAC activity and contain 25-30 different types of anthocyanins. Anthocyanin gives blueberries (and other fruits) their rich blue and red coloring, and is a powerful flavonoid antioxidant. The mechanism of action surrounding anthocyanins has been studied at the molecular level, demonstrating effects such as the promotion of healthy cells and apoptosis (programmed cell death). Blueberries provide large amounts of chlorogenic acid, which is thought to be important in promoting cellular health. VitaBlue Wild Blueberry Extract supports the bodys COX-2 inhibitors and provides powerful antioxidants in much higher quantities than fresh blueberries, and show to be effective in promoting cardiovascular health, contributing to normal cell cycle traverse, and maintaining overall cellular health.

Trans-Resveratrol and E-Viniferin (Resveravine®): 10mg
Resveratrol is a natural antioxidant found in red wine. Resveravine is a natural extract from Vitis vinifera standardized to contain 20% oligostilbenes. Resveravine is 100 to 300 times more concentrated in trans-resveratrol than other products made from grape skin. It provides antioxidant protection of low-density lipoprotein (LDL) particles, promotes normal platelet activity, vasorelaxation and blood flow, all which support cardiovascular health. It has been shown to promote apoptosis (programmed cell death) in unhealthy cells. Another proposed mechanism of action involves the study of the SIRT-1 gene (also known at the longevity gene). Sirtuins, known as Silent Information Regulators (SIRs), are deacetylase enzymes identified in all living creatures. Sirtuin proteins are known to play an important role in keeping regions of chromosomes turned off. Sirtuin controls the enzyme that converts acetate, a source of calories, into acetyl-CoA, a key component of cellular respiration. In humans, there are seven different sirtuins, SIRT-1 to SIRT-7. SIRT-1 has been studied by scientist for its potential effect on human cell lifespan.

Resveratrol promotes normal activity of SIRT-1. Studies have shown that SIRT-1 activates a critical component of calorie restriction in mammals and promotes fat mobilization. The most recent study (Nature 2006) demonstrated that obese mice fed red wine extract (resveratrol) were in better health and lived longer than obese mice that were not fed the red wine extract. The resveratrol group was more able to maintain heart health compared to mice that were not fed resveratrol. SIRT-1 activation also supports healthy mitochondrial function and supports energy expenditure. Resveratrol has also been shown to have phytoestrogen activity and may support optimal estradiol activity. Other studies have documented neuroprotective benefits associated with resveratrol supplementation.

A comparison test was made to evaluate the activating effect on human SIRT-1 of Resveravine and pure trans -resveratrol. Only the trans-resveratrol form of the molecule promotes normal activation of the mammalian SIRT-1 gene in vitro test. Resveravine was more than eight times more likely to promote SIRT-1 activity than pure trans -resveratrol, showing that Resveravine is more efficient than resveratrol in promoting the normal activity of SIRT-1. Therefore, while the specific mechanisms of SIRT-1 and resveratrol are still unclear, the studies show that SIRT-1 is essential in lifespan extension and health improvement, and resveratrol promotes SIRT-1 activity.

Studies in numerous species have demonstrated that reduction of calories 30 to 50 percent below ad libitium levels of a nutritious diet can promote a longer lifespan, improve overall health, promote normal stress resistance and decelerate functional decline. Studies showed that SIRT-1 activates a critical component of calorie restriction in mammals and promotes fat mobilization in adipocytes by repressing PPAR (test conducted on mice). Because healthy fat levels have been shown to promote a longer murine lifespan, it is suggested that calorie restriction could be connected to SIRT-1 and life extension in mammals. As an alternative strategy, new research has focused on the development of calorie restriction mimetics, compounds that mimic the effect of calorie restriction by targeting metabolic and stress response pathways affected by calorie restriction, but without restricting caloric intake. Resveratrol has been suggested as a potential calorie restriction mimetic. Supplementing mice with resveratrol significantly increases their aerobic capacity. By promoting healthy SIRT-1 activity, resveratrol promotes healthy mitochondrial function and supports energy expenditure, thereby promoting healthy weight. In vivo test conducted on mice on a high-calorie diet, resveratrol shifts the physiology of middle-aged mice on a high-calorie diet towards that of mice on a standard diet and promotes their overall health.

I am currently taking medication to manage my cholesterol. Can I still take Resveratrol?
There are no documented interactions with cholesterol medication and any of the ingredients in Resveratrol. However, before taking any natural supplement, you should consult your physician.

Can I take Resveratrol and still have a glass of wine with dinner?
Yes. There is no cause of concern.

If I am an alcoholic, can I still take Resveratrol even though it is from red wine?
Yes. Isotonix Resveratrol does not contain alcohol. Resveratrol is an extract from grape skins and vines that are used to make red wine.

Will I get drunk from taking Resveratrol?
No. Isotonix Resveratrol does not contain alcohol.

Is this product vegetarian friendly?
Yes. Isotonix Resveratrol is a vegetarian product.

Who should take this product?
Clinical studies have shown that resveratrol extract may be helpful in promoting apoptosis (programmed cell death) in unhealthy cells, supporting normal cell cycle activity, promoting the normal activity of the SIRT-1 gene, thereby supporting overall cellular health. If you are interested in promoting cellular health and maintaining good cardiovascular health, then Isotonix Resveratrol is perfect for you.

When should I start to see/feel the effects of this product? What should I expect?
The antioxidant benefits of Isotonix Resveratrol should be noticeable in about four to six weeks. Please remember that everyone’s body is different, so for some it may take longer to notice the benefits of Resveratrol. You should expect to feel better and healthier overall.

Do I need OPC-3 if I take this product?
Isotonix OPC-3 is a superior antioxidant with many health benefits. Isotonix Resveratrol can be taken with other antioxidants; in fact, antioxidants work in several mechanisms, and they build upon each other. For a complete comprehensive antioxidant defense, taking OPC-3 and Resveratrol is a smart choice protecting your body from the damaging effects of free radicals.

I take it daily

Thank you for taking the time to share your thoughts on the nutraMetrix Isotonix® Resveratrol! We are so happy to hear you are pleased with the product!

This is the best resveratrol on the market

In my opinion, the 3 patented ingredients that Market America has combined in this product make it the best resveratrol on
the market. I always switch to it in the spring when I'm really giving my lungs a workout outside. Resveravene, VitaBlue and BioVin in an isotonic form. What could be better????

Thank you for taking the time to share your thoughts on the Isotonix® Resveratrol! We are happy to hear you are pleased with the product.

Anti-aging in a great drink!

Thank you for taking the time to share your thoughts on the nutraMetrix Isotonix Resveratrol! We are happy to hear you are pleased with the product.

It is the one of the great products!

Thank you for taking the time to share your thoughts on the
nutraMetrix Isotonix® Resveratrol! We are happy to hear you are pleased with the product.

This is in my ####tail every morning!

I love this product! Every time I see a product training they remind me why it's so great and I never miss a day!

Thank you for taking the time to share your thoughts on the Isotonix Resveratrol! We are happy to hear you are pleased with the product.